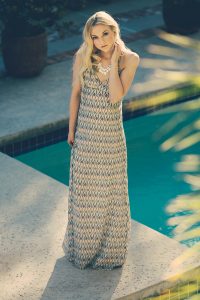 Article Written by : Milano Models Factory
Fans of Emily Kinney are used to seeing her wearing grungy, grimy clothes in her role as Beth Greene on AMC’s hit series, “The Walking Dead.” There’s not much room for glamour in a zombie-infested, post-apocalyptic world, after all.

Beyond the set, however, Kinney is plenty glamourous. She has a playful, effervescent style that makes her a woman-to-watch when it comes to celebrity fashion. The team at NikkiRich certainly took notice of all of this when they announced that Kinney would be the face of their Spring 2015 clothing collection.

Founded by designer Nikki Lund and Bon Jovi guitarist Richie Sambora, NikkiRich offers an eclectic array of women’s clothing, with an eye toward combining music, art, and fashion in their designs. Their clothes are feminine with a little bit of edge, beautiful but also modern. In other words, NikkiRich clothes are a perfect fit for Kinney’s fashion sensibility.

The working relationship between Kinney and NikkiRich began soon after Lund dressed Kinney for “The Walking Dead” premiere earlier this year. “I just loved her clothes and all of her ideas, and she has such a great eye,” says Kinney.

Lund has equally glowing words for the woman who is now the face her of clothing line’s upcoming collection. “She’s a perfect example of being able to do it all,” Lund says. “I think she’s a great role model for women of all ages.”

Photographs recently released by NikkiRich show Kinney looking gorgeous in a number of pieces from the Spring 2015 line. She models summery dresses, fitted knit tops, and a dazzling pair of electric blue pants. In what has become a fan favorite picture, Kinney wears a long, black sleeveless dress with a sheer, peekaboo panel on the front.

From bold prints to feminine florals, drapey dresses to cropped tops, each one of these images promise a Spring line that is sure to impress.

Worth noting is that in addition to working as an actor, Kinney is also a songwriter and performer, with one album out and another set to be released next year. “These are clothes that I can imagine myself wearing at my own shows,” adds Kinney. In other words, you might just see Kinney wearing a NikkiRich design next time you catch one of her shows.

For a clothing line with such deep roots in music, this only makes Kinney a more perfect face for NikkiRich’s Spring 2015 collection.